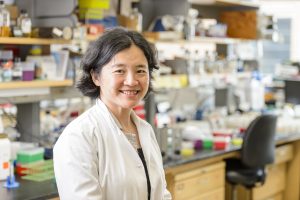 I was born in China and obtained an undergraduate background in physics from McGill University in Canada, and obtained graduate training in biochemistry from Jonathan Weissman at UCSF by characterizing the molecular chaperone GroEL via directed evolution. As a postdoc in Alan Grossman’s lab I developed a genomic method to monitor DNA replication in B. subtilis. I started my independent research at Baylor College of Medicine in 2007 and moved to University of Wisconsin Madison in 2012. Combining genetic, genomic, biochemical, and computational methods, my laboratory elucidates how bacteria deal with stress through nucleotide signaling and evolution.

The physiological role of the nucleotide (p)ppGpp in stress response. (p)ppGpp is ubiquitously present in bacteria and is crucial for their survival and virulence. How (p)ppGpp ensures survival of Gram-positive bacteria upon stress remains elusive. We had made progress in finding answers to this question. We have identified components of (p)ppGpp metabolism aided by whole-genome sequencing. Taking advantage of this knowledge and applying genetic and genomic methods, we are building a new model of (p)ppGpp function.